(developed by Veterans for Veterans)

“Literally, this course has changed my life. I have gone from many fits a month prior to the course – I’ve had none since.”

This programme has been designed with input from Veterans supported by Burnley Football Club in the Community, in order to help them find or re-establish their sense of self and place and improve relationships that have deteriorated through incident or significant change of circumstances. It is also designed to find their place in a less regulated environment and new ‘norm’, helping them to integrate back into civilian life whilst looking forward and creating a plan as to what they will achieve next with respect to their career and family life.

The programme aims to: Horses are herd animals and as such are strongly aware of the energy, intentions and non-verbal communication of others and also being prey animals they are constantly sensitive to their environment and those around them.  Horses respond without judgement, providing an instantaneous truthful reflection of how a person is in a given moment. Trained facilitators use these qualities in the horses as a sounding board to encourage self-awareness, confidence and self-esteem in the veterans.

“I’ve learned to be calmer in everyday situations.  The calmer the better.  If I slow down then I’ll become more calm and relaxed.  I’ll sleep at night. I won’t get wound up by negative people.”

In the first two weeks the Veterans were assigned tasks with the horses which allowed them to connect with themselves through connecting with the horse.  They had to change physically and mentally.  For example their default stance was ramrod straight, arms behind their back. They put on a “front” which the horse did not engage with. However, when they changed their thoughts and their energy in the way they stood, the horse responded and connected to them as they found their inner softness. They felt some vulnerability and that it is OK to be emotional. The environment created by being around the horses and the facilitators’ skilled approach enabled them to open up and talk about their feelings.  This was greatly enhanced by the peer support offered by their fellow Veterans.

The veterans felt that they knew everything about teamwork as that was what their lives depended on. However, they recognised that it was not so easy to work together with civilians. Therefore one activity was designed to involve inviting civilians as their guests and team mates. This took them out of their comfort zone and became a catalyst for connecting with the community. The outcome of this activity was that one group was very democratic and one was autocratic, and they found there were benefits in both ways of working. This is what one of the Veterans said he got from this particular activity.

“This week was about team events. The Facilitator gave a challenge where we had to plan an obstacle course, with what we’d learnt from the previous two weeks, but also involving new people who had not worked with horses.

We had to get our horse around a course without the leadrope on.

Completing it, we then had to talk about how we did. I thought as individuals our input was good, but as a team we all did not listen to each other. For myself I learnt that I should listen to everyone before anything is decided. I know that this has made a lot of difference to my home life as I had forgotten how to listen.”

In the final week of the four week course all participants worked with the horse on their personal goals.  Their journey with the horse showed them the issues and challenges, some of the steps they needed to take and they then agreed the actions they would take to get there. They reviewed their learning with the horse and planned for the future and celebrated their achievements.

At the end of the course the Veterans were given the optional extra 1-1 session to use as they wished. They looked at what their future might be and created a timeline of activity represented by obstacles on the ground which they walked with the horse. This brought out some issues which gave an opportunity for the Veteran and Facilitator to discuss and consider solutions. This could be just for themselves, or with their wife or partner, or with their family. One Veteran chose to bring his estranged family together who all lived in different parts of the country. To witness three generations all hugging each other as one, as a consequence of working on how they would see each other more regularly with the help of Pepe a little grey pony, and how they would spend Xmas together with Grandad, was heart-warming and emotional for everyone!
The effectiveness of the programme was also evaluated by using the Warwick Edinburgh Mental Well Being Scale (WEMWBS) a questionnaire using a 14-item scale covering subjective wellbeing and psychological functioning used by public health professionals. See https://warwick.ac.uk/fac/med/research/platform/wemwbs/

The WEMWBS score for the group increased significantly by 55. (A change of eight points is deemed as significant change). “I have been dealing with problems well” was the statement with the most improvement as a whole with a significant group increase of eight. 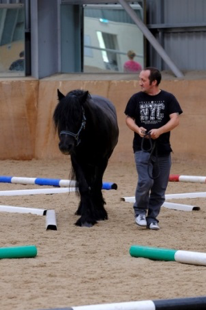 “This course has allowed for the Veterans to put themselves in new situations, therefore finding positives in themselves that they may never have otherwise. The layout of the course has allowed for some great self-development but also the way they have worked together has given them some great insight into how they want to move forward with their lives, confident in the knowing that they are fully in control. It’s great to see the continuous changes in the guys from week one, knowing they will always have this experience to help that self-development continue. A lot of the guys were looking to find a balance between their military and civilian personality, this is something they have all managed to start exploring.”