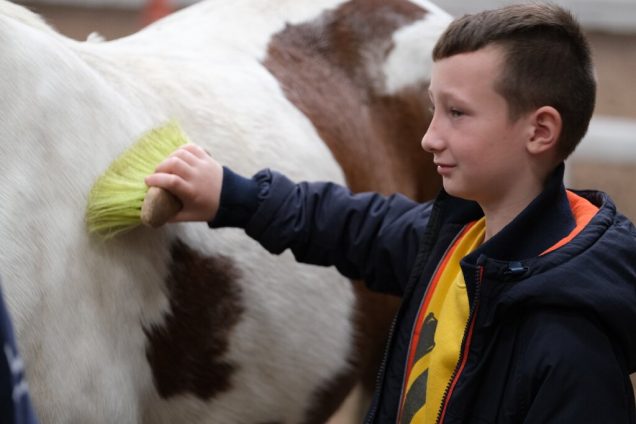 Out of the classroom and into an Arena with a pony!

An opportunity to do something different was offered to Primary Schools in Bolton and six schools took up the chance for their year 5/6 pupils to experience the HorseHeard ‘Being Friends’ programme.

This was a completely different way to develop greater self-awareness, awareness of others and confidence and self-belief, really important life skills, with the help of a Pony as Coach.

Alfie said: “I’ve learned that I am more confident.  I need to keep going and keep my energy”. “I can do it! I’ve learned to be brave and happy” said Ricardo. Another child said “I was a good team member by helping people when they got scared”.

The model of working with a cluster of schools provided an opportunity for them to meet new friends and start to develop a relationship this included the pony and enabled a dialogue around similarities and differences and what makes a good friend and how to be a good friend.  This is particularly relevant when the children are moving on to Secondary School and having to meet lots of new people and make good friendships.

The children each worked on an action specific to them between sessions, although individual a theme developed around self-confidence and self-belief.  Spending time with a pony, with help from a facilitator, the children made rapid changes in how they were thinking and feeling and this lead to them having a different belief about the actions they could take.

Staff from the schools attended each session which enabled them to monitor progress, check on actions in school and the feedback was very positive.  ““The children have been really looking forward to their sessions, the programme is having a positive impact on them and supporting their progress in school.” Another said of one pupil “He really has come out of himself and he was able to speak with confidence in front of all of the group – expressing himself more than ever before”.